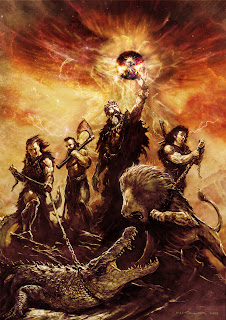 So, the band Beastwars I did some album art for a while back are releasing their very own beer - does it get more metal than that?!

Heres the painting I did in photoshop for the beer label featuring the guys from the band. Would have been great to do it as an oil painting in true Frazettaesque style but time limits didn't permit.


A bit more info on the brew and upcoming tour dates:
http://cheeseontoast.co.nz/2011/10/03/beastwars-hit-the-road-north-island-tour/

Nick Keller
Hey there! I'm a concept artist and designer working in Wellington for Weta Workshop. This blog is intended to share some of my sketchy & painterly meanderings. Feel free to contact me at nickbkeller@gmail.com